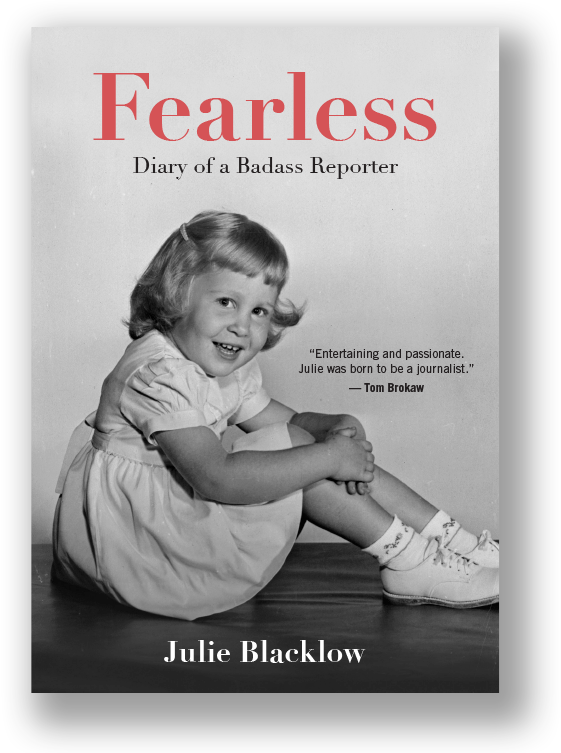 Fearless—Diary of a Badass Reporter

is the narrative of a most uncommon and astonishing life—where even as a teenager Julie Blacklow displayed qualities that marked her as a natural for reporting. Courage, tenacity, and a willingness to get in anyone’s face if it served her mission to help people were in her DNA. Her intolerance of injustice made her especially popular—or unpopular—depending on which side of the fence you sat. She fit right in at Seattle’s KING-TV, where the owner instilled an ethos of excellence, honesty, and always doing the right thing.

Blacklow was among the first women in television news in America. With her curiosity, determination and willingness to tackle other people’s stories, Blacklow survived and thrived in a forty-year career…covering murders, movie stars and making trouble whenever it needed to be made. Throughout her decades in the television news business, she met thousands of people and learned along the way how to ask questions in the worst—and best—moments of their lives. As a reporter, she had to remain objective, her passions and thoughts hidden. Now she is free of those constraints.

After decades as a journalist, Julie Blacklow changed careers and returned to what she loved most as a child—horses. She bought a foal and took over managing a horse ranch in the shadow of a mountain near Seattle She has survived a dramatic television career, cancer, and dozens of extreme highs and lows and tells us about all of it in her unforgettable memoir.

“Julie Blacklow’s career in Seattle’s lively local news scene was one big story after another which she recounts in Fearless in her omigod style. Fearless, entertaining and passionate. Julie was born to be a journalist.”

“A wickedly funny, entertaining and heart-wrenching page-turner. Julie’s laugh-out-loud wit and eloquent prose give us a glimpse behind the curtains of history; events that are thrilling, sometimes gruesome and shocking and seemingly unreal. Courage, heart and relentless determination seep from the pages of this real-life story. Fearless is a story of resilience and survival—a poignant reminder of what it takes for the bravest of journalists to keep up the fight.”

“My main interest is making sure that all do themselves a huge favor and read Fearless! It chronicles the compelling life story of an individual of enormous candor, tenacity, and talent. God, Julie just opens up her heart, her secrets, her deepest thoughts in a way I found so unusual. What amazes me is how she brings together so many significant stories and key events of our generation in so few pages and makes it such an enjoyable read that runs a roller-coaster gamut from thrilling to poignant. It is hard to explain how deeply taken I was by this book.”

“For a person whose life’s work revolved around telling other people’s stories, Julie’s is worth the price of admission. At a time when some consider news ‘fake’ and journalism itself is under attack, this is a master’s degree in reporting from one of our business’s best ever. Julie knows news and knows how to make you cherish it as much as she does. I knew she was good when we were co-workers, but I had no idea of the badass she really was.”